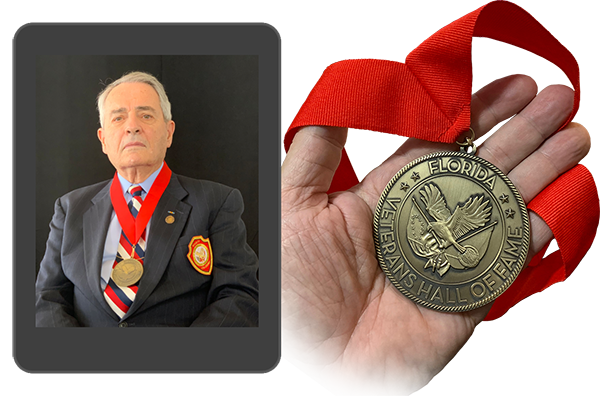 I am constantly in awe of the numbers of Veterans that he touches on a daily basis and feel that my influence pales in comparison to his selfless advocacy for aging Veterans in the community and this is my daily work. I personally helped him carry LtGen Lawrence Snowden to his last interview and watched with amazement how he handled this great warrior with all the dignity that one could ever hope for. He is “there” for every Veteran on their last days and then for the families after they depart. He walks the walk, without expectation of any recognition for himself. He will be shocked to be called that he was even submitted for this honor. It took great effort to secure his information from his wife for all of us who admire him to ensure that he is thanked for his heart and his passion. I’ve personally tried to get his information for the past three years without success because of his modesty about his work for others.

He teaches, he leads by example and only when he is sure to impact many through his message, will he ever step in front of the camera. He is ALWAYS the go to guy to speak at every high school, every college, and every public Veterans event when the message is meant to be sincere and to revere those who have gone before us.
General Webb has been the greatest supporter of Aging Veterans Outreach for the State. His advocacy will impact the lives of thousands of Veterans to allow them to remain in their homes through their earned benefits. He’s sharp as a tack on all current events and is our encyclopedia of knowledge when dealing with how to best serve those in suicide prevention, opioids addiction, aging benefits, and daily health and welfare. I have personally observed this man in physical pain yet serving others in his words, “in greater need.” Service above Self is his mantra and it has served so many others to follow his lead.

Professional or Employment History:
General Webb served 29 years in the United States Air Force, retiring as a Brigadier General in 1986. In his final assignment he was Deputy Assistant Chief of Staff for Allied Command Europe Headquarters from 1984-86, and responsible for U.S. Intelligence support to the NATO Alliance. In his military capacity he currently represents West Point Director of Admissions in the Congressional District.

General Webb’s career includes more than 20 years of permanent residence external to the United States, to include Ethiopia, Belgium, Taiwan, Vietnam, Hong Kong, and 15 years in China. As an Asian specialist he directly participated in developing the U.S. China relationship from 1974-1979. As Senior Defense Representative in Beijing, China from 1979 to 1982, he was the interface between the U.S. Department of Defense and China’s military forces.

General Webb is a Command Pilot with excess of 3,000 flying hours in a wide variety of operational aircraft. He is a graduate of the United States Military Academy at West Point. He holds a Master of Science Degree in International Affairs from George Washington University. He is a graduate of the National War College and the U.S. State Department’s Foreign Service Institute School of Chinese Language and Area Studies and its Senior Interdepartmental Seminar. He is fluent in Mandarin Chinese and Spanish. General Webb served as President of United Technologies-China (1986-1992).

Advocacy on Behalf of Veterans:
General Webb’s staunch support of the Military Officers Association of America, Tallahassee Chapter has carried this organization to new levels of membership and influence in legislative actions that were crucial to the benefits and support of Veterans. He inspired a resurgence in activity to ensure that all local military officer Veterans had a voice in governmental issues. General Webb has been the face of Veteran Advocacy on television and in the newspapers due to his incredible knowledge of issues and his ability to educate the general population on getting involved.

He advocates for the aging Veterans and surviving Spouses through his personal actions in finding and visiting those in need. General Webb became a leading member-at-large for the Florida Veterans Foundation, exceeding all predecessors in leadership and action by example propelling the Foundation into a whole new level of performance and accountability. He is looked to for his creativity and solution-based initiatives to aid in meeting Veterans’ need.

General Webb’s several decades of service have touched generations of warriors and their descendants as he pays personal tribute to those that have passed. I have personally witnessed the goodness of this leader as he seeks out all to recognize those who have served in uniform and those surviving families who need comfort. He is always at the ready to wear his uniform with pride to show that he recognizes the value of service by others.

General Webb served in leadership roles within the Air Force Association, building the rolls of members and facilitating worthwhile work within the community. As President, he was a strong advocate for our mission both nationally and at local activities in concert with working with AFROTC and CAP cadets in strengthening their roles as future leaders for the society and in our nations defense as a member of the armed forces.

Civic Activities and Contributions:
General Webb’s leadership as Director of International Service for the Rotary Club of Tallahassee (2007-2009) continues to inspire many to give service above self. He led the effort in keeping with World Water Day and Rotary International’s theme — Make Dreams Real — through collaboration with the Rotary Club of San Miguel de Allende Midday to launch “The Los Torres Water Collection Project” in Mexico. He was instrumental in implementing individual self-sustaining rainwater collection systems in two villages of 434 residents, ensuring the provision of safe drinking water to every household. Water in the area was highly contaminated with fluoride and coliform. “Accumulation of fluoride in the human body presents an especially high risk to children.”

In keeping with the Rotary International objectives for international projects, Gen Webb was instrumental in coordinating the First Bi-National Conference on

Diabetes (2008), a partnership between the Rotary Club of Tallahassee and other Rotary Clubs of San Miguel de Allende with the participation of rotarians including Dr. Larry Deeb, past President of the American Diabetes Association. This Conference led to a donation of a Retinopathy Camera which has helped to prevent blindness due to diabetes. General Webb’s great work goes beyond the boundaries of the United States, providing a show of good ambassadorship to the world.

The Economic Club of Florida has been another organization that has benefited from Gen Webb’s leadership and involvement since he joined the Club in 1994. He was a member of the Board of Directors and was later elected Vice President (2006), President-Elect (2007) and President in 2008. In these positions of leadership, he provided considerable momentum to the objectives of the Economic Club and was able to draw the very best, not only out of the Board of Directors, but also members throughout the Club. During this period, the Club enjoyed an excellent array of program speakers bringing highly informative information on economics and business. As a General officer, his leadership qualities benefited the Club substantially throughout his tenure.

Awards or Honors:
Contributions to the State of Florida:
​A few of General Webb’s community service;