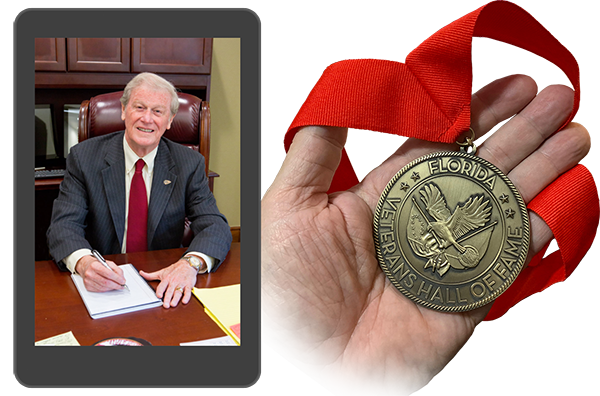 President Thrasher has credited his Florida State University education in business and law and his service in the U.S. Army for helping him to develop the leadership skills he has used to serve the people of Florida for nearly 50 years.

His contributions to the state of Florida are unparalleled. As a young attorney, he worked with
the legislative staff on the House Select Committee on Impeachment on the case of three
Florida Supreme Court Justices. As a local elected school board member, he gained an understanding of how the Florida education system worked at the grassroots level and carried
that knowledge with him to the Florida House of Representatives and the Florida Senate. As Speaker of the House, he was able to build a bipartisan coalition around important education
policy such as the "A+Education Plan." In the Florida Senate, as chairman of the Rules Committee, vice-chair of the Budget Subcommittee on Higher Education Appropriations and a member of the Joint Legislative Budget Commission, he was able to focus support for higher education needs. He was a key supporter of legislation that brought funding to the development of the Florida State University College of Medicine. At the time, it was the first
new medical school to be established in the United States in nearly 20 years, and the building at the college is named in his honor.
As the first chairman of the Florida State University Board of Trustees, Thrasher worked with the administration to address increased enrollment, student retention, minority recruitment, unprecedented facility construction, faculty hiring and fundraising at FSU. With his background and focus on higher education, Thrasher was ideally suited to assume his current role as the president of Florida State University. In this capacity, he has again demonstrated extraordinary leadership. In 2016, Florida State University moved up five places in the U.S. News and World Report rankings and is now the 38th best public university in the country. In 2015, FSU received the university's largest private gift to date and the largest ever given to a public university in Florida: $100 million from Jan Moran and the Jim Moran Foundation to establish the Jim Moran School of Entrepreneurship slated to open later this year.

Furthermore, over the past two years, the university has accepted the most academically talented students in its history. It has a 94 percent retention rate and a graduation rate that is 20 percentage points higher than the national average. In addition, Florida State University is now one of the nation's top producers of Fulbright students, and FSU has more Fulbright students than any other institution in Florida.

To summarize, John Thrasher is a distinguished veteran and dedicated public servant whose contributions to the state of Florida are unmatched. He has been married for more than 52 years to his wife, Jean, and together they raised three children and are now the proud grandparents of eight. He has served his community, his alma mater, his state and his country with honor and dignity.

Education and Training Accomplishments:
Thrasher attended Florida State University where he received a bachelor's degree in business in 1965 and a Juris Doctor degree with honors in 1972.

Professional or Employment History:
Military Service: Received a direct commission to the Medical Service Corp in 1966 and served three years in Germany before serving in the Republic of Vietnam for one year before being discharged.

Employment and Professional History:
Academic, Legislative and Community Leadership:
Advocacy on Behalf of Veterans:
In every capacity he has served — whether as a member of his local school board, as state representative or state senator, or as president of one of the two preeminent universities in Florida — President Thrasher has always focused on veterans. As Speaker of the Florida House of Representatives, Thrasher was in the forefront in his advocacy for veterans' issues. He led the fight for establishing Nursing Homes for Florida Veterans through House Bill 955. He defended the current military base posture in Florida in his testimony during the Base Realignment and Closure (BRAC) Hearings. He worked to ensure enhanced opportunities in Veterans Business Enterprises, HB 687, and to be sure that military children and veterans were afforded the
highest level of education in HB 1203 and HB 521. As the Rules chairman of the Florida Senate, Thrasher brought numerous veteran-friendly bills to the Senate floor, including Senate Bill 430, which provides educational opportunity at state expense for dependent children of military personnel who die or suffer a disability in specified military operations, and Senate Bill 480, which provides vocational rehabilitation for wounded veterans. In 2014, Thrasher was awarded the Congressman William Young Legislative Service Award for his contributions to the Florida National Guard. That same year, he was also awarded the Patrick Henry Award from the National Guard Association of the United States.

In addition, President Thrasher's work with student-veterans at Florida State University is becoming legendary. He has placed a priority on the FSU Student Veterans Center, which provides a campus venue and cultural network for support of veterans to aid them in their transition from active military service to an educational environment. The center assists student veterans, service members and dependents in securing VA educational benefits and provides support for this underserved segment of the academic community. As a result, combined graduation and retention rates have increased, and FSU is recognized as a national beacon of veteran support and success.