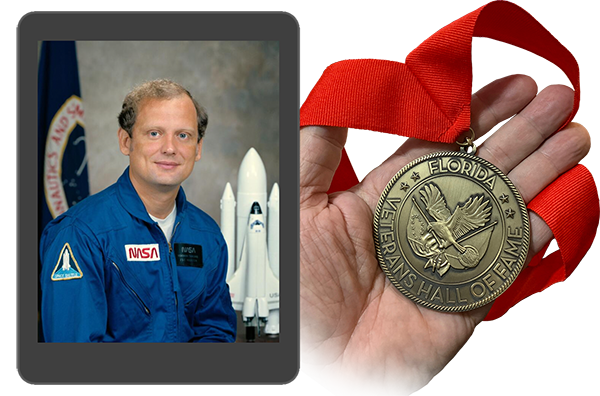 Dr. Norman Earl Thagard is an honorably discharged Captain of the United States Marine Corps serving from 1966 to 1971.  He was designated a Naval Aviator in 1968 and was subsequently assigned to duty flying F-4 Phantom IIs with VMFA-333 at Marine Corps Air Station Beaufort, South Carolina. He flew 163 combat missions in Vietnam while assigned to VMFA-115 from January 1969 to 1970.  Dr. Thagard pursued his studies in Electrical Engineering, and a degree in medicine. He is a licensed physician.

Thagard was selected as an astronaut candidate by NASA in January 1978. In August 1979, he completed a one-year training and evaluation period, making him eligible for assignment as a mission specialist on future Space Shuttle flights. A veteran of five space flights, he logged over 140 days in space. In 1995, Thagard was the first American astronaut to blast off in a Soyuz spacecraft from Russia’s Baikonur Cosmodrome for a flight to the Mir space station. He also has been inducted in the Astronaut Hall of Fame in 2004.

A native Floridian, Thagard received degrees from Florida State and also earned a degree from the University of Texas Southwestern Medical School.

Dr. Thagard served his fellow veterans for close to 50 years, and then later as someone with the knowledge and expertise to navigate through bureaucratic processes for much needed and much deserved benefits. Through the years, his selfless efforts brought recognition from elected officials and senior leadership as well as the respect of his neighbors, family, and friends. A case in point was his nose-to-the-grindstone work ethic in making the Challenger Learning Center and IMAX Theater a reality for the countless numbers of students that would have their eyes opened to learning about science and technology.
Education and Training Accomplishments:
1965 Florida State University, Bachelor of Science, Engineering Science
1966 Florida State University, Earned Master of Science
1977 Graduate of the University of Texas, Earned Doctorate
1993 Russian Language School at the Defense Language Institute (DLI) on the Presidio at Monterey
1994 Space Training for First American Flight with Russia 1996 Johnson Space Center, NASA Astronaut
2004 Inducted into the Astronaut’s Hall of Fame 2004 2007 University of Florida, Earned Master of Science

Professional or Employment History:
Dr. Norman Earl Thagard’s professional and employment history is what one would read about in history books and consists of successes and accomplishments that young people dream about. From the beginnings of a hard-earned education to flying Marine F-4 Phantoms in the Vietnam War to becoming a surgical Doctor to becoming the first American Cosmonaut with several follow-on successive space missions, Dr. Thagard has virtually seen it all and done it all in his professional and humble fashion.

Dr. Thagard didn’t stop “wowing” the crowds with his fame but rather took his earned influence to create opportunities for young people to learn. One would have to go far and wide to find a more talented and dynamic model to emulate. The bottom line is that he continued to be the ambassador for good and inspiration. A brief history of his meager beginnings are:
Advocacy on Behalf of Veterans:
Dr. Norman Thagard’s role as a Veteran Advocate is too extensive to list in the limited space of this nomination package so I will list his work in bullets to encompass the breadth and depth of his commitment. Dr. Thagard’s premier position of speaking to Veteran Service Organizations as a highly respected international figure and also to younger people throughout the United States gave him the pulpit to exude the inspiration of continued service to country. He has continued for 57 years to carry the torch for the United States Marine Corps in recruiting, and personnel self-improvement.

It would be near impossible to imagine the opportunities the Marine has taken to inspire and teach Veterans and Military Members about having purpose and working at goal achievement. He commanded the podium to lead others to excellence. Vision of purpose and following your heart gave hope to the tens of thousands he has influenced over his tenure in service to country. Credibility served as his foundation through performance to execution of the next hurdle. The level of achievement and the longevity of Norm Thagard’s service to veterans is remarkable by anyone’s measure. These astonishing accomplishments, to list a few, which served to inspire Veterans are:
Civic Activities and Contributions:
As for Civic Activities and Contributions, Dr, Thagard has made literally hundreds of personal appearances, addressing civic groups such as Rotary Clubs, professional groups, as well as K-12 schools, colleges, and universities. A few specific examples: Member of Economic Club of Florida. Graduation Keynote Speaker:
Section 7:
Awards and Honors:
Military Awards: Professional Awards:
Civic Award and Honors:
Written narrative:
Dr. Thagard’s life is characterized by service. This service was exemplified through his untiring commitment to God, country, and fellow citizen. A humble man, through meager beginnings, Thagard volunteered to serve his country as a young man in Vietnam, flying combat missions. His patriotism did not end with his active duty service. For over 50 years he served the nation to shape and mature young men in the values that made our nation great. He is an untiring leader for the community and nation, serving countless veterans in many communities, and civic organizations. He led the way for the United States in space travel as the first American Cosmonaut. He has been recognized by several Presidents and foreign leaders for his contribution to manned space travel.

Norman Thagard always made it a point to honor those who served our country and those who paid the ultimate price for freedom. His leadership in modeling the way for young people and Veterans is literally unparalleled by any other person in this world. He provided testimony through countless speeches to all of hard work and application to succeed. His dogged determination in reaching his goals served as the challenge to the many successes of those who would follow him.

Norman Thagard served his fellow veterans for close to 50 years, and then later as someone with the knowledge and expertise to navigate through bureaucratic processes for much needed and much deserved benefits. Through the years, his selfless efforts brought recognition from elected officials and senior leadership as well as the respect of his neighbors, family, and friends. A case in point was his nose-to-the-grindstone work ethic in making the Challenger Learning Center and IMAX theater a reality for the countless numbers of students that would have their eyes opened to learning about science and technology.

Norman’s lifetime work for veteran advocacy is unwavering and lasting: he lived for service to God, Country, State, Local Community, and Fellow Man. You would have to travel far and search wide to find a more deserving candidate for the Florida Veterans Hall of Fame.

I have the distinct honor of knowing Dr. Thagard and watched his devotion to Veterans and Country. His service was unprecedented and unparalleled by any veteran that I have ever had the pleasure of knowing. Norman’s singular actions are beyond the imagination to consistently advocate and recognize those veterans who served their country. His energy and dedication to do the unthinkable for Country is without peer and I would challenge his accomplishments against anyone internationally. He has done the hard work of several and it was never about the personal gain. It is always about demonstrating the capability of a United States Veteran.

As a United States Marine, he continues his passion for service to others, especially those who served their country. Dr. Thagard unequivocally maintained his focus and energy as a staunch advocate in supporting, serving, and honoring all military veterans as a force that is vigilant throughout our nation. Veterans will enjoy the incredible impact that this man has had for generations to come and it is all due to the tireless, selfless hard work on the part of Norman Thagard.

Norman Thagard served as an example for countless veterans through his dogged work ethic and counts each and every veteran that he had the pleasure of inspiring to achieve, or the family that stands alone without their warrior, as those who provided their time and their life for their country. He is revered by the communities that were blessed to have him as a leader and his reputation is undisputed and unmatched by any.

Norman Thagard’s dedication and devotion to the military is a matter of record of his distinguished life. His reach has touched countless in the past, present, and will do so in the future. He still continues to give his life to the service of the nation and young servicemen and women and Veterans that he taught along the way at every opportunity and has been since 1963. He IS, without question your first choice to represent the ranks in the distinguished Florida Veterans Hall of Fame. Norman Thagard’s contributions in the name of veterans is a matter of record in state and international archives. There is no denying his prodigious impact to the world, past, present, and, educating those in the future who want to know how to continue service to their country. His only reward was that of the heart in knowing that he had served those who served their country. Norman Thagard is the epitome of one who embodies all of those admirable attributes that is a true Veteran Hall of Famer. Grant his family the honor of knowing that this man’s service was the very best that one person could give. Select him now as a member of the Class of 2020.