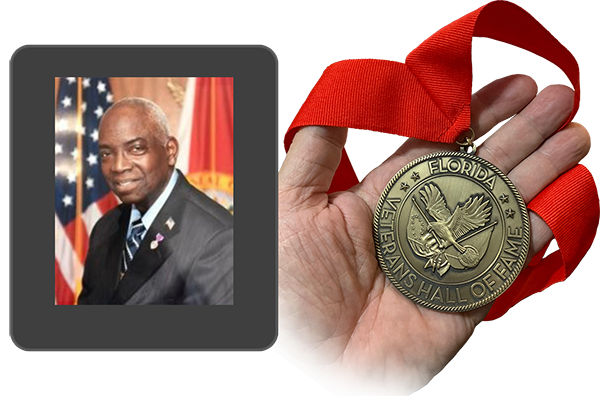 Colonel Sanchez is the epitome of one who embodies all of those admirable attributes that is a true Veteran Hall of Famer. I had the distinct honor of working with him during the Florida Veterans Walk of Honor Unveiling. His unbridled energy and extraordinary esprit de corps brings military organizations together in unity to provide relief to Florida Veterans. Washington sets the example of extraordinary service to mankind in a modest, yet prolific manner.

Due to Colonel Sanchez’s gifted level of perseverance and dogged determination, veterans have begun to realize relief through the opportunity to gain medical access to Hyperbaric Oxygen Therapy (HBOT). His personal efforts and collaboration with HBOT pioneers have realized three approved veterans for treatment for Traumatic Brain Injury and Post Traumatic Stress Disorder (PTSD) in Tallahassee, FL. His understanding and articulation of the Choice Program proved invaluable to the veteran’s ability to undergo treatment.

Washington’s leadership and collective buy-in of attorneys and judges to the Leon County Veterans Treatment Court (VTC) has provided pathways for veterans with criminal charges to receive much needed mental health and/or substance abuse treatment. His countless, inexhaustible volunteer hours led veterans to counseling, support meetings, (drug and alcohol testing), a startup peer mentorship for the VTC, housing, vocational training, education and/or
job placement services.
Colonel Sanchez’s dedication and devotion to the military is a matter of record of his distinguished life. His reach has touched a countless number of veterans in the past, present, and will have a lasting impact in the future. He still continues to give his life to the service of veterans at every opportunity.

Education and Training Accomplishments:
Colonel Sanchez was commissioned in the Army through FAMU’s ROTC Program, and graduated from the (Army War College) Industrial College of the Armed Forces, the Command and General Staff College at Fort Leavenworth, KS, and earned a Master's degree in Industrial Engineering from Kansas State University in 1979.

Professional and Employment History:
Washington Sanchez served 27 years with troops in the Army Field Artillery. Early on he was wounded while serving as a Forward Observer with an Airborne/Airmobile Company of the First Cavalry Division in Vietnam. His Vietnam service also included an assignment as Commander of a split 8in/175mm Battery Fire Base for eight months. From 1972-1975, Washington was stationed in Germany as a 155mm Direct Support Battalion Operations Officer. Six years later he returned to Germany to command the 155mm Direct Support Battalion of the First Infantry Division (Forward) for a period of three years.

Colonel Sanchez’s final troop assignment from 1987-1989 was as Commander of Grafenwoehr Training Area, which at the time was the largest training center in Western Europe. Non-Troop assignments included working in Intelligence and Research/Development.
Colonel Sanchez served as president of a real estate investment group for two years, was a volunteer for the Florida Department of Banking and Finance, serving as Vice Chairman of a Statewide Task Force that proposed legislation on neglected and abandoned cemeteries. He also served as the Deputy Administrator of District Ten, Florida Department of Children and Families in Broward County for two years.

Advocacy on Behalf of Veterans:
As Chairman of the Florida Veteran Foundation Chairman, Washington innovated and incentivized so many programs that touch the very essence of each veteran he encounters. Through his personal impassioned drive to help veterans, Washington worked feverishly for FVF to ultimately be awarded a S1.25M grant. He innovatively modeled and executed a unique personal approach to reach veterans through core subject matter expert support via Florida Veteran Summits and a churches’ awareness campaign. His relentless example to serve Florida Veterans has reached over (200,000) 100,000 in an unprecedented positive, productive manner.
​
This bio is testimony to Washington’s tireless dedication and devotion to Florida Veterans through health, entrepreneurship, employment, education, and partnership within the community by way of Homeless and At-Risk Veterans, and Veterans with Legal Issues. Particularly, his unparalleled persistence of the introduction of Hyperbaric Oxygen Therapy into Florida Veterans lives has gained critical acclaim. His “lifesaving” initiatives are a reality to Florida Veterans with the ultimate goal of reducing veteran suicides Washington’s proactive role in Leon County Veterans Treatment court has identified veterans with qualifying criminal charges. He enlisted judges and attorneys while encouraging eligible veterans to enter into this problem solving treatment court, saving many veterans from incarceration, thus enabling those with families to continue support at home.

His positive influence into countless cases and veterans lives is commendable. His personal time and heart in the matters of their personal lives has saved lives, money, and set the example for others who have lost their way. Without question, his servant character and diverse approach of example is priceless.

Civic Activities and Contributions:
For the past seven years Patriot Sanchez served in many positions with the Department of Florida Military Order of the Purple Heart (MOPH) to include Senior Vice Commander, Judge Advocate, and Inspector. Colonel Sanchez served two years as Chapter 758 Commander. In that position, Colonel Sanchez conducted the 1st First Responder Award for fallen veterans who served with the Tallahassee Police Department. Washington also conducted the first Purple Heart Awareness Ceremony at the Capitol and initiated an effort that brought Florida Afghanistan/Iraq Memorial Portrait Mural to the North Florida Fair for display for 10 days to include during Veterans Day. Washington assisted in efforts to make Florida a Purple Heart State. Following that achievement, he spearheaded efforts that led to Leon County to become a Purple Heart County, and Tallahassee becoming the 1st Purple Heart Capitol City with FAMU becoming the 1st Florida Purple Heart University and the 1st Purple Heart Historical Black College/University. In 2011, Colonel Sanchez was elected as the Commander of Department of Florida, MOPH.

In July 2012, Washington was appointed as the Florida Veterans Foundation, District One Director where he also served on the Board of Directors. In December 2012 Colonel Sanchez was elevated to Chief Operating Officer for the Florida Veterans Foundation. In April 2013, Washington Sanchez conducted the 1st 3 day Homeless Veterans Stand Down at the North Florida Fairgrounds. Washington has been the primary advisor for 3 day Stand Downs in Miami, and Pasco County, Florida. In less than one year Washington was appointed by Colonel Mike Prendergrast, Executive Director of the Florida Department of Veterans Affairs to Chairman in August 2013.