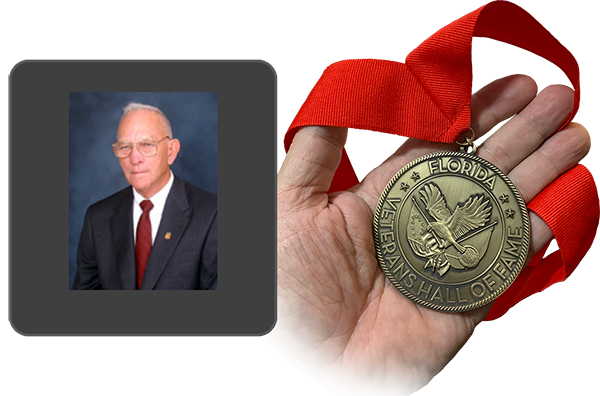 As a former United States Army Captain he continued his passion for service to others, especially those who served their country. Dr. Proctor has unequivocally maintained his focus and energy as a staunch advocate in supporting, serving, and honoring all military veterans as a Florida Representative for eight years from the  preparation for BRAC and also eight House Bills ranging from establishing a Veterans Nursing Home, Veterans Education, and Military Children's education. Veterans will enjoy the incredible impact that this man has had for generations to come and it is all due to the tireless, selfless hard work on the part of Dr. William L. Proctor.

As Flagler College President, Dr. Proctor served countless veterans through hiring as professors, staff, but more so made it possible for veterans to pay a nominal fee to realize their educational goals. The far-reaching impact that Dr. Proctor had and still has on veterans throughout the state of Florida is without peer.
Dr. William Proctor's dedication and devotion to the military is a matter of record of his distinguished life. His reach has touched countless veterans in the past, present, and will do so in the future. He still continues to give his life to the service of veterans at every opportunity and has been since 1957.

Advocacy on Behalf of Veterans:
Dr. Proctor's role as Flagler College Administrator was noted for the growth of Flagler College to its present noteworthy standing however, his greatest single contribution to the college was his staunch support in hiring veterans to positions of leadership and academia. Dr. Proctor was best known for his proactive stance on showcasing the talents and discipline of the veteran ranks that became the core of Flagler College. Additionally, Dr. Proctor made it possible for veterans to attain degrees at Flagler College for a nominal fee to show his support of those who served their country.

As Florida Representative, Dr. Proctor’s passion for veterans was first and foremost through his tireless work in supporting, serving, and honoring all military veterans throughout his eightyears of service. From the preparation for BRAC and eight House Bills ranging from establishing a Veterans Nursing Home, Veterans Education and Military Children’s education, his work is unprecedented. His additional work on the House Military and Veterans Committee are as follows:
• Session of 2006
HB 955 Veterans Nursing Home of Florida Act
• Session of 2008
HB 687 Veterans Business Enterprises
HB 1203 Interstate Compact on Education Opportunity for Military Children
• Session of 2009
HB 685 Educational Dollars for Duty Program Revisions
• Session of 2010
HB 521 Re-enact Florida Interstate Compact on Educational Opportunity for Military Children (Constitutional provision required periodical re­ enactment)
• Sessions of 2011 and 2012
Served on House Education Committee

Civic Activities and Contributions:
Dr. William Proctor was appointed President of Flagler College in the spring of 1971. His prior professional experience included teaching and coaching at the secondary level, coaching at the university level, deanships at two state universities, and school superintendency. He served as President of Flagler College for 30 years, resigning on 1 July 2001 upon his appointment to the State Board of Education by Governor Jeb Bush. He continues his service to the College in the position of Chancellor.

In November 2004, he was elected to the Florida House of Representatives, representing District 20, which encompasses portions of St. Johns, Clay, and Flagler Counties. He was reelected in 2006, 2008 and 2010. During his service in the legislature Dr. Proctor passed legislation in such diverse areas as healthcare, veterans and military affairs, historic preservation, and all levels of education. Representative Proctor served as Chairman of the House Education Committee and as a member of the Appropriations Committee.
​
Dr. Proctor is a former chairman of the Independent Colleges and Universities of Florida and served as chairman of the Commission on State Relations of the National Association of Independent Colleges and Universities. For eighteen years he was a member of the Board of Trustees of the Florida School for the Deaf and the Blind, serving as chairman for twelve years. Dr. Proctor served as vice-chairman of the Florida Education Standards Commission and for two terms as a member of the Commission on Colleges of the Southern Association of Colleges and Schools.

Awards and Honors:
Dr. Proctor earned his Ph.D. in Education Administration from Florida State University and has been honored by FSU with the Distinguished Educator Award, membership in the Athletic Hall of Fame, inclusion in the Alumni Association’s 100 Distinguished Graduates, and induction in the University’s Circle of Gold. Among other awards presented to him in recognition of his professional and public service are the Florida School Boards Association Lifetime Achievement Award; the Liberty Bell Award, presented by the Independent Colleges and Universities of Florida; the Order of La Florida, the City of St. Augustine’s highest honor; the Commissioner of Education’s Life Education Achievement Award; the Distinguished Service Award, presented by the Florida School for the Deaf and Blind; and the Patrick Henry Medallion for Patriotic Education presented by the Military Order of the World Wars. He is the recipient of honorary degrees from NOVA Southeastern University and Flagler College.