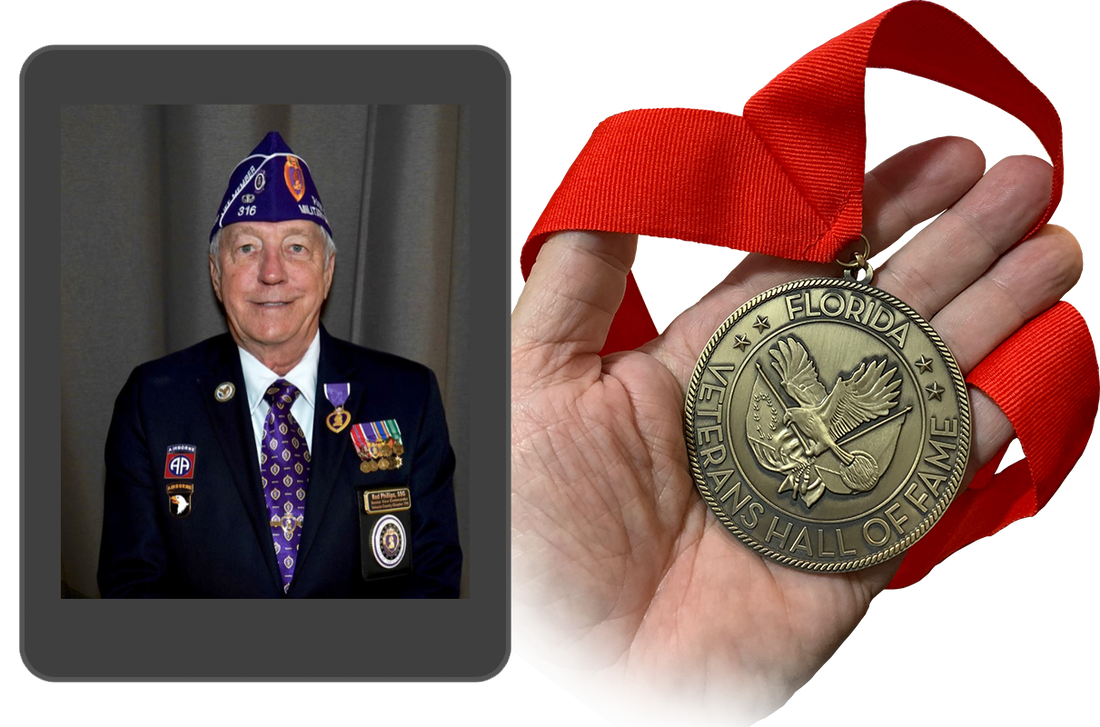 Staff Sergeant Rod Phillips is a proud Combat Wounded Vietnam Veteran who joined the United States Army in July of 1967, following the traditions of his Father, Uncle’s and Grandfathers, attending infantry training at Fort Benning Georgia, Advanced Infantry training at Fort Gordon Georgia returning to Fort Benning for Airborne Jump School.  In December 1967, after Parachute Training Rod was assigned to the 101st Screaming Eagles Airborne Division in Vietnam, another generation of the Band of Brothers.  Rod's introduction to Vietnam was during the infamous Tet Offensive of January 1968.

While in Vietnam Rod walked point, the tip of the spear, in the Northern I Corps area of the Ashau Valley, Hue-Phu Bai near Laos, and the DMZ, conducting search and destroy missions in 101st Airborne operations Somerset Plain, Nevada Eagle, and many others.  Rod was promoted to the rank of Staff Sergeant and awarded the Bronze Star, the Purple Heart, the Air Medal, and more medals including Presidential Unit Citations.

Upon returning from Vietnam, Rod was assigned to the 82nd Airborne Division at Fort Bragg North Carolina.   He is a graduate of the 82nd Airborne Raider/Recondo, survival, evasion, resistance and escape course, Long Range and Reconnaissance Patrol training, preparing for a second tour in Vietnam which never came.   Rod also served on the 82nd Airborne Divisions Honor Guard, traveling across the country performing military funerals of his fallen comrades who paid the ultimate price of the Vietnam War and who are truly America's Heroes.   While at Fort Bragg Rod was also assigned to the Military Police Provost Marshal's Office performing Law Enforcement and Security duties and responsibilities.  ​
After an Honorable Discharge from Army active duty in July of 1970, Rod remained in the Army Reserves, serving with the 11th Special Forces Group located on the campus of Miami University in Miami Florida.   Rod began his Law Enforcement career of 38 years, serving with Metro Dade in Miami, Palm Beach County Sheriff's Office Road Patrol, Field Training Officer, Crime Property Detective, Robbery Homicide Detective, Internal Affairs Investigator, Risk Management Investigator, and with the State of Florida, including Instructor at the State Law Enforcement Academy in Tallahassee, he retired in 2010 as a Lieutenant.

Rod is currently in his fifth term as the elected President of the Vietnam Veterans of America (VVA) Daytona Beach Chapter 1048, with 260 plus members, among many duties he serves as the VVA 1048 Mentor Coordinator for the Judge David B. Beck Veterans Court in Volusia County.  During his leadership VVA Chapter 1048 has received both State and National awards.

He is the past 2nd Vice President of the Vietnam Veterans of America Florida State Council (VVAFSC), serving 2 terms (4 years), VVAFSC has over 4500 members and 32 chapters, where he served as chairman of the Agent Orange and PTSD committees.   In 2016, Rod coordinated five Agent Orange Town Halls across the state with one in Daytona Beach which had over 300 people in attendance, Rod and VVA Chapter 1048 were recognized by National VVA (over 600 chapters) as joining only nine other VVA Chapters in the country to have had over 300 people attending an Agent Orange Town Hall.  Also, in 2016, his VVA Chapter 1048 members nominated and Rod received the VVA National Achievement Medal for his outstanding community service, advocacy and dedication to our veterans and veteran issues.

He is the past Commander of the Military Order of the Purple Heart Chapter 316 Volusia County, past President of the VVA Florida Vietnam Veterans Assistance Foundation and past editor of the VVA Florida State Councils bi-weekly newsletter, the E-Recon, receiving the VVA National award for “E Newsletter of the year in 2016”.   Rod also has served three terms as a Vice Commander of the Veterans Council of Volusia County and serves on the Homeless Veterans steering committee with the Council, coordinating five yearly Stand Downs, for Homeless Vets.

In October 2017, Florida Governor Rick Scott, and his Cabinet Selected Rod to be inducted into the Florida Veterans Hall of Fame which was established in 2013 to recognize and honor those military veterans who, through their works and lives during or after military service, have made a significant contribution to the State of Florida.

On December 7, 2018 Rod received the Four Chaplains Legion of Honor Medallion for his outstanding contributions service to community, nation and humanity.  Rod and his wife Linda, a Registered Nurse of 45 years, also retired from Halifax Health Hospice, live in New Smyrna Beach, they have 3 children, Rodney II, Rachel, Clayton and four Grand Children.