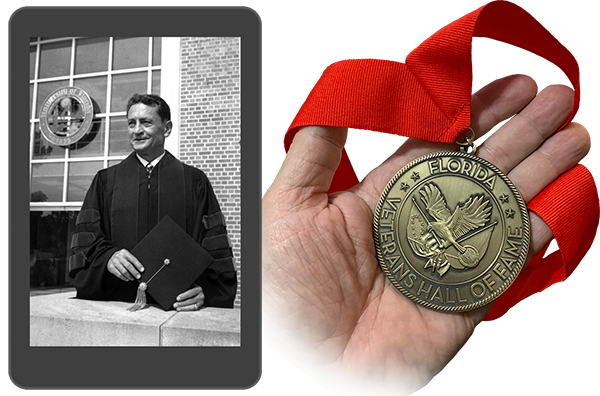 Justice O'Connell's contributions to the state of Florida are legendary. As an attorney, banker, jurist, university president and friend, his focus was on personal sacrifice to make Florida a better place for those who followed. During his 12 years on the Florida Supreme Court, the peers of Justice O’Connell remarked that his style of judicial review was marked by efficiency and a thorough respect for the law, legal precedent, and the correct mechanisms of government During his two terms as a Justice, O'Connell was billed as a conservative, and according to his own definition of one, had great "respect for authority" and "respect for other people’s rights as a major university administrator, he was without equal. Total enrollment at the University of Florida rose from 19,000 in 1967 to over 23,500 in 1973. This required the hiring of new professors, and a building program for more classrooms, offices and laboratories. A 1970 evaluation of graduate programs by the American Council on Education gave national ranking to twenty-two departments compared to eleven in 1965. He reorganized the Alumni Association and created an office of University Fund Raising to meet the growing needs of the university.

His advocacy for women and minorities was also well known. In 1972 at the University of Florida President O'Connell approved the change for University women's athletics from being traditional women's intramural teams to being budget approved University teams. It had not been done before in the Southeastern Conference and was instituted by President O'Connell at the University of Florida before Title IX became law. The Florida program began with five teams - golf, tennis, swimming, track and gymnastics. The total budget was $16,000.
The rest, as they say, is history.
Former University of Florida President John Lombardi, on the occasion of O'Connell's death, may have said it best. "Few have equaled his accomplishments; none have done so with such grace. This state and nation need more like Steve O'Connell, and we will see few." It is with a great deal of pride that I was able to call Stephen Cornelius O'Connell a friend, a mentor and a person whom I have greatly admired. I met the Justice in 1983 when I was involved with Springtime Tallahassee, our community festival, and he was the CEO of Lewis State Bank. In 1992, when I decided to run for a seat on the Leon County Commission, I asked Justice O'Connell to lead "Democrats for Host" and he actively and enthusiastically filled that position. From that time until his death in 2001,1 had the good fortune to be in his company on a regular basis. He was always the consummate southern gentleman who loved his life and lived it to the fullest. He is the model of a devoted servant of the State of Florida and his impact on the state continues to inspire and enhance the lives of Florida citizens.

​Professional or Employment History:
Military Service:
After briefly practicing law in Fort Lauderdale, Florida, O'Connell accepted an appointed as the civilian director of physical training for the U.S. Third Air Force in Tampa, Florida, and thereafter entered active duty service as a 2nd Lieutenant with the U.S. Army Air Corps. During World War II, he served with the Fifth Air Force in Brisbane, Australia and as executive officer of the 312th Bombardment Group in the Western Pacific. He served in New Guinea, the Philippines and Okinawa. He completed his wartime service with distinction and was discharged on April 12,1946 as a Major.

Civilian Life:
Stephen C. O'Connell was born in 1916 in West Palm Beach, Florida, and attended public schools in West Palm Beach and Titusville, Florida. After graduating from high school, he attended the University of Florida from 1934 to 1940. The story is told that O'Connell departed for Gainesville on a train whose closest stop was the town of Waldo, miles northeast of the University campus. When he arrived, O'Connell hitched a ride on a flatbed truck that took him on to the University of Florida. The University would greatly influence his future activities. He not only was a good student he took to the idea of service to others. He was a member of the Army ROTC. He was a member of and president of Alpha Tau Omega Fraternity. He was elected president of his sophomore class in 1935-36, president of the Newman Club in 1937, president of the student body 1938-39, and president of Florida Blue Key leadership society in 1939. He was also a star athlete and captain of the Florida Gators varsity boxing team where he set the record for the fastest knockout - twelve seconds including the count - won the Southeastern Conference middleweight boxing championship, and was later inducted into the University of Florida Athletic Hall of Fame as a "Distinguished Letter Winner".

After completing his wartime service, he returned to his old law firm in Ft. Lauderdale, Florida. He became the Counsel for the city of Hallandale, the North Broward Hospital District, and the Florida State Racing Commission and later. Chief Counsel for the Florida State Road Department. During that time, he also became active in the Broward County Democratic Party. He participated in the gubernatorial and senatorial campaigns of Dan McCarty, George Smathers and LeRoy Collins.

In appreciation of his loyal work on behalf of the Democratic Party, Governor LeRoy Collins appointed O'Connell as a justice to the Florida Supreme Court in 1955. Collins had a great deal of difficulty convincing O'Connell to give up his thriving law practice, where he earned six times as much as the $15,000 Justice salary at that time. Yet, O'Connell agreed to serve. This sense of duty at personal sacrifice was a consistent theme of O’Connell's life. In 1967, he was elected by his fellow justices as Chief Justice of the Court, where he served briefly, until the Florida Board of Regents selected him that year to be the president of the University of Florida.

As the sixth president of the University of Florida, O'Connell was the first alumnus of the university to be appointed as president. His six year tenure at UF was a tumultuous one - as both racial and the Vietnam War protests raged across the country. By the 1967 fall term, only sixty-one black students were enrolled at the University of Florida, and many of the black students were actually foreign exchange students. Also, there were no black professors. When O'Connell left the presidency in 1973, there were 642 black students and ten black faculty members - a tenfold increase from when he started as president. In the aftermath of the 1970 Kent State shootings, when many American universities were forced to close and send their students home, UF kept the university open and classes, exams and commencements were held without serious interruption. During the August 1973 commencement proceedings, the assembled graduating students twice rose to their feet spontaneously to pay tribute to the man who guided the university through its most difficult era.

After retiring as university president, he returned to his home in Tallahassee, restarted his law practice, remained active in university affairs and engaged in cattle ranching at his beloved Turkey Roost Plantation. In the mid-1970s, O'Connell became chairman and chief executive officer of Lewis State Bank, then the oldest bank in Florida. He held that position until 1983 when he returned to the practice of law. O'Connell died on his cattle ranch near Tallahassee on April 13, 2001.

Advocacy on Behalf of Veterans:
Justice O'Connell was always an advocate for veterans. Upon becoming the sixth president of the University of Florida in 1967 he reflected on his time in service during WWII and helped institute the Veterans Center at the University of Florida. The university always had a great tradition in military service dating back to WWI when 274 of the 434 men enrolled at what was then all-male University of Florida went to war. It is estimated that as many as 10,000 UF students served in World War II. Many faculty members also joined and the war had a radical impact on the campus. By the peak year of 1944-45, UF had just 740 students, down from 3,500 before the war started. The university lost 401 students to World War II alone.