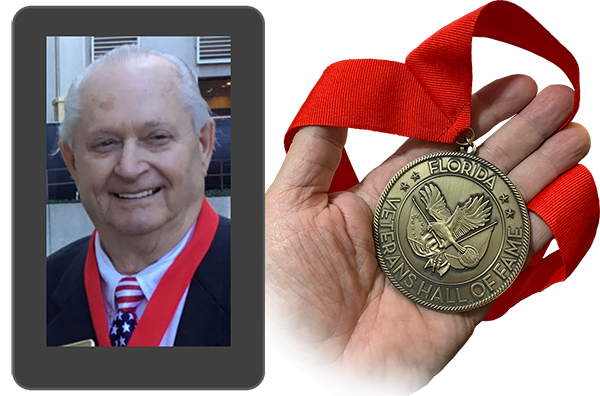 Gary Newman is passionate about assisting and mentoring veterans, spending countless personal hours doing so, and inspiring others. He founded Vietnam Veterans of America Chapter 1059 in Clay County in 2012 and helped start the incarcerated chapter at Union Correctional Institution that same year. Currently, WA Chapter 1059 has 128 members and the UCI Chapter 1080 has 106 members.

In addition, along with WA Chapter 1046 president Tony D'Aleo, Gary Newman helped start a "scared straight" Veterans Interaction Program at UCI aimed at the younger veterans returning from Iraq and Afghanistan. He helped start the Veterans Treatment Court in Clay County which is designed to help veterans stay out of prison and seek outside counseling.

A crowning achievement was organizing, financing, construction and dedication of the TAPS Monument, a memorial dedicated to the memory of the 66 fallen Clay County veterans who will now be remembered forever.

Mr. Newman recently spearheaded a local project to build and dedicate the TAPS Fallen Warriors Monument in Green Cove Springs, Florida. The monument honors 66 Clay County veterans who lost their lives in combat. In cooperation with local businesses and individuals, Mr. Newman has ensured that the memory of those fallen soldiers will not be forgotten.
EDUCATION AND TRAINING ACCOMPLISHMENTS
Gary Newman was born in Centerline, MI on February 28, 1942. He spent a good part of his youth in orphanages and foster homes. His stepfather was in the Air Force and was stationed in Fairbanks, Alaska, when Alaska was still a territory. When he turned 17, Gary Newman entered the U.S. Navy on March 15, 1959 at Kodiak Naval Station. He attended basic training at NTC San Diego. He completed basic training and a six-month Western Pacific cruise before this 18th birthday and Hawaii's statehood.
Gary Newman had a very diverse and distinguished 20-year Naval career. He served his first 12 years as a torpedo man and in 1973 he changed his career field to Master-at-Arms, which is a law enforcement field. Gary learned a lot through his early (hard-knock) life experiences and on the job, that helped develop his people skills and his willingness, ability and passion for lending a hand-up.

PROFESSIONAL OR EMPLOYMENT HISTORY
Gary Newman had two tours of duty in Vietnam - onboard the USS Maddox (August 1964) during the Gulf of Tonkin incident and 1967-68 with the Mobile Riverine Force, Mekong Delta. Newman is the only torpedo man to have served on "river-boats" in Vietnam. During his Naval career he served on seven different Navy destroyers and one submarine tender. His duty assignments included two years. Armed Forces Police, Subic, Philippines; two years. Armed Force Police, Brooklyn, NY and La Maddalena, Sardinia. Duties included supervisory and criminal investigator.

​He retired from the Navy in March 1978 while holding the rank of Master-at- Arms Chief Petty Officer. He was immediately hired as a Clay County, FL Deputy Sheriff. In August 1983, he became Chief of Police at Naval Air Station, Jacksonville. In 2004, he was promoted to Deputy Director of Security at NAS Jacksonville. He retired from Civil Service in 2007. During the security positions at NAS Jacksonville, Newman held leadership positions with a workforce of over 250 law enforcement employees which required daily planning, scheduling and budgeting (over a three-million- dollar annual budget).

He has also received awards from the Vietnam Veterans of America - Chapter Membership Award of the Year (2015) — from the WA Florida State Council - Chapter Special Recognition (2012), Presidents Special Recognition for new Veterans Treatment Court (2015) and as Member of the Year (2017). He has also been recognized for his work with incarcerated veterans by both WA National (2017) and the Florida State Council (2015).

ADVOCACY ON BEHALF OF VETERANS
It was after his retirement from the Navy at the encouragement of his wife, Mary Anne, Gary Newman started working with and for veterans. First, he became a member of Vietnam Veterans of America Chapter 1046 in Duval County and eventually was the founder of Chapter 1059 in Clay County.

In October 2011, Newman started Vietnam Veterans of America Chapter 1059 in Clay County with 25 members and was awarded a WA charter in January 2012 with 44 members. Currently, the Chapter has 128 members and Newman served as president until April 2018.

Also, in 2012 Newman was contacted about starting a WA Chapter in the Union Correctional Institution in Raiford for the incarcerated veterans. Currently, UCI has 108 members and Newman serves as advisor for the chapter and was instrumental in Chapter 1080 being recognized as WA Incarcerated Chapter of the Year and Chapter 1080 president Ed Snook as Incarcerated Member of the Year.

Three years ago, Newman formed a group of veterans, civil groups and community of the Clay County to get a monument constructed in Green Cove Springs dedicated to the 66 fallen servicemen and women from the county, dating back to the Civil War. The TAPS Monument located at the old Clay County Courthouse and was dedicated on Oct. 11, 2017 and was financed completely without any governmental assistance.

In addition, he was the first vice president of the Clay County Veterans Council when it was formed in 2014. His goal is to continue to work on behalf of veterans and especially the incarcerated veterans. He is a member of the Vietnam Veterans of America Veterans Incarcerated and in the Justice System national committee.

In addition, he has been instrumental in the Veterans Treatment Court in Clay County, helping to get it started. Gary is currently working with the administration at Union Correctional Institution to provide veterans buried in UCI's cemetery with the dignity due any serviceman or woman who fought for our country, by placing a head stone grave marker indicating their name and branch of service. These are veterans who died without family or whose family members could not (or would not) claim the body, and their graves are currently marked only with a small metal tag denoting name, inmate ID and date of death. He actively supports the Associates of the Vietnam Veterans of America, a group that supports the needs of veterans and their families.

AWARDS AND HONORS
Not a person to seek the limelight, Gary Newman has been recipient of several awards from the Vietnam Veterans of America Florida State Council, including 2017 Member of the Year.
His effort working with the incarcerated chapter at Union Correctional Institution resulted in UCI receiving a national WA award -- Incarcerated Chapter of the Year (2017) and member Ed Snook as Incarcerated being recognized Member of the Year (2017).
Gary Newman was the keynote speaker at the Nov. 11, 2016 Veterans Day ceremony at Camp Blanding Joint Training Center in Starke.