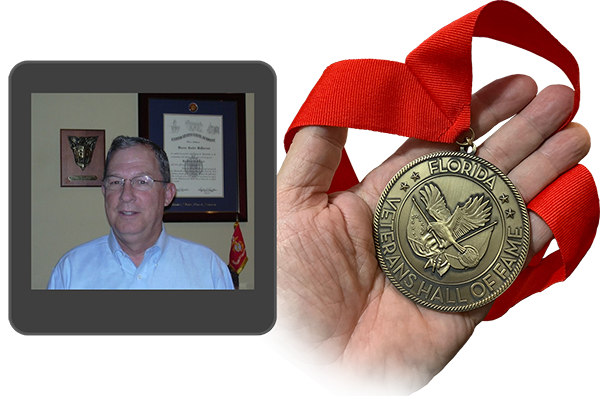 Over the course of more than 29 years, Colonel Warren R. (“Rocky”) McPherson served the United States of America and contributed immeasurably to the national security of the nation via his distinguished active duty career with the United States Marine Corps. In the course of his career, Rocky went from being a pilot, to a Squadron Commander to directing the activities of thousands of Marines and civilian personnel.

After retiring from military service, Rocky spent four years in the defense sector, assisting their support of the U.S. Marine Corps, providing expert guidance and coordination.

Rocky was then recruited for a top leadership position with the Florida Department of Veterans’ Affairs, serving as its Director of Administration and Public Administration. For three years Rocky worked as Chief Operating Officer of the Department, overseeing all operational functions, conducting strategic planning, and leading all special projects.

In 2002, Rocky earned a promotion to lead the Florida Department of Veterans’ Affairs as its Executive Director. During Rocky’s five years of leadership, the Department designed, constructed and staffed three new state veterans’ nursing homes; designed, constructed and dedicated the Florida World War II Memorial and monument; and led the Departments initiatives to enhance programs to identify, contact and support severely wounded service members for the Global War on Terror. Under his administration, the Department multiplied by a factor of five from a $15M annual operation to over a $76 million operation. Moreover, Rocky earned a reputation for running a lean, effective, and waste-free operation. Every dollar spent required maximum returned value for the veterans and citizens of the State of Florida. Rocky McPherson led the way.
Following his tenure as head of the Florida Department of Veterans’ Affairs, Rocky was hired by Enterprise Florida, Inc. in 2007 to serve as its Vice President of Military and Defense Programs. In this role, Rocky is responsible for five major state programs in support of the military and defense industry in Florida, including the Florida Defense Alliance and the Florida Defense Support Task Force. For the past eight years, Rocky has been driving force in keeping Florida’s in the forefront as the most military and veteran-friendly state in the Nation. His tireless efforts have produced sustained and tangible results indicative of his unparalleled selfless service.

Furthermore, Rocky has established a legacy of building dedicated teams of public servants, and mentoring and inspiring future leaders, which a force-multiplier of benefit to the citizens, service members and veterans of the State of Florida. I have the good fortune to work with many professional men and women who Rocky hired, trained and energized who bring value every day to their public service for the State.
​
In sum, Colonel Warren McPherson has devoted his life to public service. Whether it was serving almost 30 years in the United States Marine Corps or his 16 years of service to advocating for veterans and Florida’s military communities and defense industry. Rocky epitomizes what it means to serve the public and stands as an exemplary candidate worthy of selection and induction into the Florida Veterans Hall of Fame.