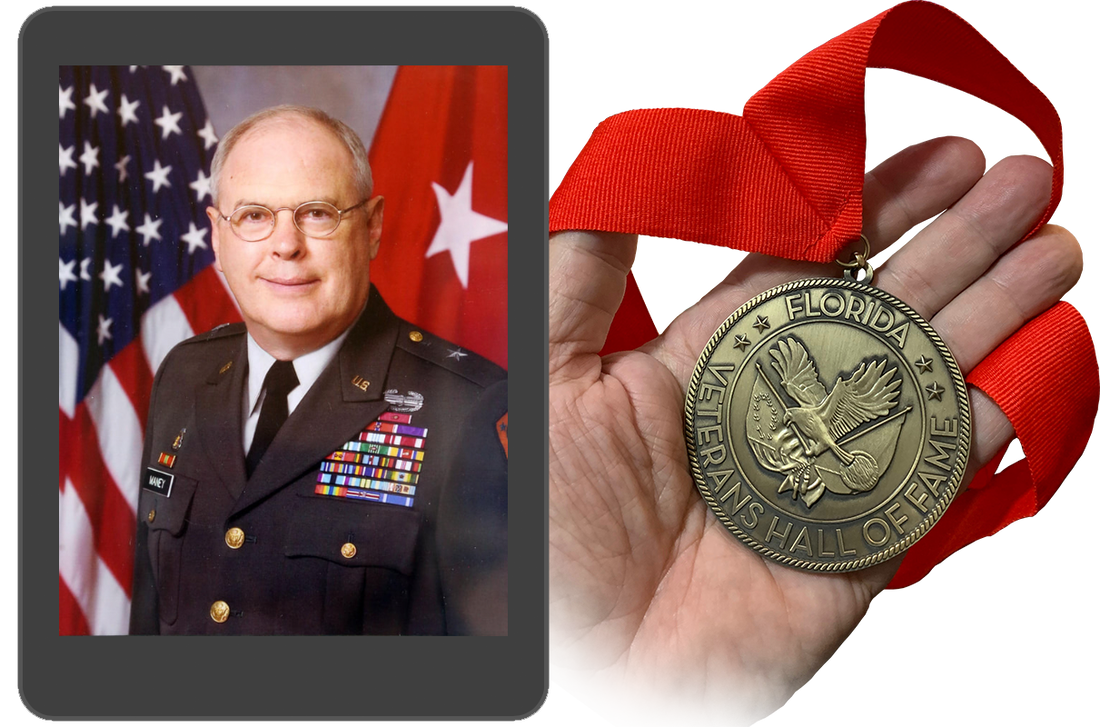 Judge Thomas Patterson Maney, Brigadier General, US Army, retired, has had a remarkable career as a jurist in both the military and in state levels of service. His final years of military service included serving as the Political Sector Coordinator and Senior Advisor to the US Ambassador to Afghanistan focused on bottom up, citizen targeted, enterprise driven, and private sector assisted economic development under fire. He held the diplomatic status of Attache'. He was seriously wounded in an Improvised Explosive Device (IED) attack on August 21, 2005, and spent almost twenty months recuperating at Walter Reed Army Medical Center.

A key element of the rationale for honoring Judge Maney (ret.) is his TBI recovery and the extension of it to treat and serve others. His story involves a long series of Hyperbaric Oxygen treatments which enabled a truly remarkable regaining of mental functioning capability. Even gaining the authority tc undergo this treatment regimen involved literally battle with the Army medical bureaucracy as it not been a standard authorized TBI treatment in the past. Today it is among available treatment options because of the persistence and determination to not only avail himself of what literally is a medical miracle, but he has continued with a strong positive and successful effort to make this capability available to many other similarly affected wounded warriors. Hyperbaric Oxygen treatment was so successful with Judge Maney (ret.) that his mental capability recovery enabled him to return to the bench as a serving County Judge .
​Once he was able to return to the bench, Judge Maney (ret.) undertook a wide variety of personal efforts to assist veterans however he could. He focused on finding ways to enable the existing legal system to develop an alternative manner of assisting with legal civil and criminal situations created or affected by TBI/PTSD. Judge Maney (ret.)'s efforts lead directly to the passage of FS 394.47891, the T. Patt Maney Veterans' Treatment Act, which created today's Florida Veterans Courts program in Florida's legal system. The first Veterans Court was created in his County and since 2012 there are now 30 existing Veterans Courts, one in almost every major city in Florida.

The long term positive impact upon thousands of veterans finding themselves legally involved is the fact that Veterans Courts now exist to assist not only with appropriate case adjudication, but also with finding services to deal with very difficult problems of justice-involved veterans with a military related substance use and/or mental health disorder including TBI and PTSD. Under the program, veterans are diverted to treatment programs or provided other alternatives that allow them to avoid jail time if they can stay on track. Veterans Court requires the participant to appear regularly before the Court, attend mandatory treatment sessions, and submit to frequent testing for substance abuse.

The personal efforts of Judge Maney (ret.) also extend into other aspects of veterans assistance such as Suicide prevention, family support, and civil rights. He is a passionate patriot who thinks and acts in every way he can to ensure that those who elect to voluntary serve our Nation through military service have the recognition and support which a grateful Nation must provide to those who protect our vital national interests and our personal and national Freedoms. He is particularly dedicated toward assistance to severely wounded warriors and their families, and to ensuring they receive lifelong support earned by their military service and personal sacrifices.

Education and Training Accomplishments:
Professional History:
Judge Maney (ret.) has a total of almost 36 years combined active and reserve service, 1970-2007. After initial entry on active duty for training, Judge Maney (ret.) attended law school and served in the Ready Reserve. After graduating from law school, he remained in the Reserve. Judge Maney (ret.) practiced law for 15 years before being appointed to the bench as Okaloosa County Circuit Court Judge in 1989.

As a Reservist, Judge Maney (ret.) had several tours of active duty. Due to page maximums, not all have been provided but can be made available. After each period of active duty, he reverted back to reserve status and continued with his civilian profession as a County Judge. Contingency deployments to Panama (Operation Just Cause), Haiti, Bosnia (Operation Joint Endeavor) and Afghanistan (Operation Enduring Freedom) followed where he was called to duty, served and returned to the bench. The most dramatic of the two periods of active duty were service in Bosnia and service in Afghanistan for almost 17 months with subsequent recovery at Walter Reed Army Medical Center for almost 20 months.

Before deploying to Afghanistan and Bosnia, Judge Maney (ret.) taught as an adjunct professor at both Okaloosa Walton Community College (now Northwest Florida State College) and the University of West Florida. He has won non-partisan elections successively since, one whilst deployed. In 2016, Maney became the longest serving county or circuit judge in Florida's First Judicial Circuit. Judge Maney (ret.) will retire 21 May 2018 after 29 years on the bench.

Advocacy on Behalf of Veterans:
Judge Maney's activity is unique in duration as during his service in the US Army Reserve, while he was also a sitting County Judge, his activity in community and veterans organizations has been continuous. This differs significantly from qualifying activities which here-to-date have occurred following active duty military service. He has long been active in patriotic events as a guest speaker, community advocate for veterans, and in supporting local defense community efforts on behalf of military service members and their families which reside in his defense dependent community near Eglin Air Force Base in NW Florida.

Following his severe injuries incurred in an IED attack in Afghanistan in August of 2005, and a more than two year recovery period including lengthy hospitalization and follow-on treatments, and his medical retirement, he has rededicated his service to veterans and wounded warriors for the last eleven years. As a blast brain injury wounded soldier, his recovery challenges were extensive and as each evolved he evaluated every step in the recovery process for its applicability to not only his case, but the hundreds of other soldiers hospitalized alongside of him. His lengthy recovery period also allowed him to experience the many significant mental health and member family support challenges which severely wounded veterans and their families must deal with for a lifetime. He became the voice of the soldier in recovery, and following his medical retirement in 2007, he has continued being the voice of the wounded warriors in Florida and local military dependent communities. A portion of this education about living in a new normal is a unique understanding of the severely wounded service person with support needs beyond any normal families' capabilities. A good portion of this included mental health challenges for veterans dealing with PTSD, rehabilitation and new career retraining opportunities, stresses of families dealing with never expected or planned for new responsibilities, and even dealing with situations regarding encounters with the justice system.

This view of veterans in his locale created clear visibility on the need for a new capability within our states legal system to deal with veterans and legal encounters. Judge Maney (ret.) saw this urgent need and rose to the occasion by becoming the driving force to create the first Veterans Court(s) in Florida. Today more than 30 Veterans Courts exist, one in almost every major city in Florida because he saw the need and strove to lead to a viable new program to address this need. As a part of this program he also works to solve associated problems related to mental health, training, employment, justice-involved veterans, and obtaining earned and needed veterans services from the US Department of Veterans Affairs.
Civic Activities and Contributions:
Awards and Honors: