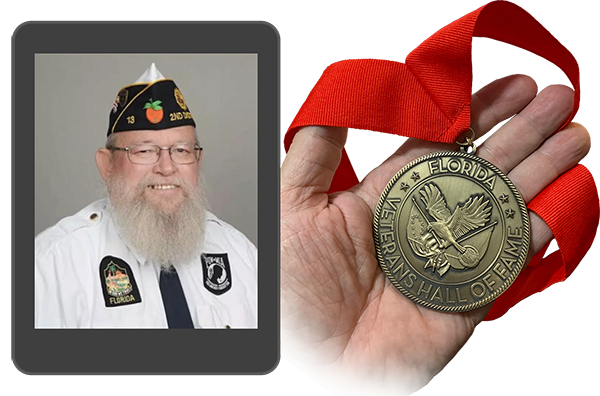 John wasn’t a person that achieved greatness in government, the Navy or as his profession as a postal worker. But how do you define “greatness?” For John, you see a person that is rich in friends, acquaintances and those who know of him and would like to meet him or have him on their team/organization. There is an interesting aspect I’ve found about John is that One, over the past few years, he is now a personal and trusted friend/co-volunteer and Two, people want to be around him and work with him.

He is the quiet leader who listens to others, ensures he understands their point of view and then makes a reasoned decision. Generally, there is full acceptance. But even when there is disagreement, it is with respect that John listened prior to his decision.

Santa Claus (John Folsom) is a clue into the leadership of John. He wants people to feel good and feel good about themselves. You can’t always do that but that doesn’t mean you can’t try. Understanding the requirements of being a great Santa Claus is not unlike what does it take to be a good leader of a specific organization. You have to know the organization and what makes it work right. Then you have to know how to make appropriate changes. Plus, you have to know how to motivate your workers and engage those leaders you report to. But most of all you really are there for the customer. Whether that is small children, teenagers hitting that age of non-belief or adults who want to see the joy of their children with Santa Claus. See that last page.
So, my detour above is really to explain why John is such a great person. He LOVES people and wants to take care of those who also served our great Nation. There are a number of organizations that he belongs to amongst the Veteran community. He is either a leader or influencer in each one that he is a member. Of course, his reach is limited and his outstanding capabilities are mostly focused on Tallahassee. But that is what makes us the lucky ones. He isn’t dragged off to other duties at State or National level organizations; very much our gain. The Veterans community knows that he is the quiet leader that helps make this local area gel. I could go on and write a lot more but like public speaking the best thing is to stop writing before you stop listening/paying attention.

Education and Training John Folsom has received:
Professional or Employment History:
Advocacy on Behalf of Veterans: "Anyone who knows me, knows that I support a beard...The truth is a little deeper than that. It is my Santa beard. The joy of being Santa, even if for just two months out of the year is almost indescribable[One time] Three young ladies age range 7, 9, and 12 were telling Santa what they wanted. The older of the three told me she wanted her dad home for Christmas. After they got up her mother came over and whispered” He is due home next week”.... A week later the three girls are back at the mall waiting to see Santa,... We were all waiting for him to arrive home from his deployment. The Santa set must have had two hundred people circle around it. TV and radio crews were there. The girls came up each on my knees. As the oldest girl told me once again how she wanted her father home, I reached into my Santa Bag pulled out a handful of magic dust threw it into the air, and with a deep bellow “ HO,HO,HO” the father, in camo, holding gifts appeared from behind the tree."

As an E-4 on the USS Galveston, John defended a fellow Sailor at a Summary Courts-Martial. This was very unusual for a junior enlisted Sailor to serve as Defense, but the Sailor had confidence that John would do a better job than others. The JAG approved it. The charge was following asleep on duty. The presentation of the poor leadership involved with assigning the accused to the duty at the base in S. Vietnam did ultimately lead to a conviction. But the convicted Sailor was given only two hours extra duty for two weeks and an apology by the court members. This appeared to be due to the NCO shortfalls that created the problem faced by the Sailor. A win for the Sailor who put his trust in John Folsom.