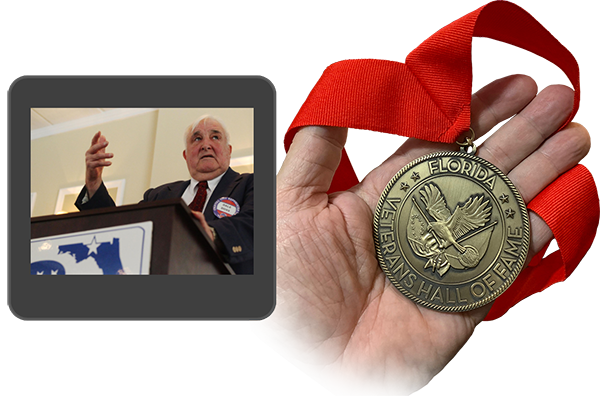 Captain Doss is one of the most highly decorated veterans of the Vietnam War. For conspicuous gallantry and intrepidity in action against an armed enemy of the United States, he was awarded two awards of the Silver Star Medal, the third highest military award for valor that can be given by the United States of America. He received 3 Distinguished Flying Cross Medals for valor in aerial combat. He was awarded the Legion of Merit with Combat “V” for exceptional meritorious achievement and meritorious conduct while serving as a prisoner of war. He received 2 awards of the Purple Heart Medal for wounds suffered at the hands of the enemy. He was awarded the Bronze Star Medal with Combat “V” for heroism in a combat situation. He received 5 Air Medals for completing over 50 missions against an armed enemy. Dale also received the Prisoner of War Medal for his service as a POW. He received many other combat and service awards for his long and honored service.

Captain Doss left active duty with over 26 years of service and was placed on the Disability Retired List due to disabilities received while serving as a prisoner of war. Upon being placed on the Disability Retired List, he was selected for employment by the Leon County Veterans Service Office as a veterans counselor. Three months later he was selected for promotion and became the Leon County Director of Veterans Affairs, a position that he excelled in for over 19 years.
During this period, Captain Doss made a positive contribution to the lives of thousands of our veterans and their families by his positive actions he was able to remove hundreds of our veterans from a homeless veteran status to that of a productive citizen. Due to his dogged actions Dale was able to keep many of our veterans in college when their government checks failed to arrive on time. In short. Dale Doss is a saint in the eyes of many of our veterans and their families, and our citizens of north Florida.

All of the above was accomplished even though Dale was failing in health and greatly suffering from the injuries and severe abuse that he incurred while he was a prisoner of war. It is also noteworthy that he completed his daily duties as a Service Officer, going far above the requirements of his position, without complaint or impact in any way on his service to our veterans. It should also be noted that throughout his time as a prisoner of war, he never released any military intelligence, no matter how severe the degree of torture.

Dale is currently recuperating from massive heart surgery and a three month stay in the hospital. He is presently at home undergoing convalescence therapy, complete recovery is not expected for another eight to ten months. Captain Doss still possesses that “Can Do” attitude for our veterans, and still provides assistance to our veterans within his limited capability. Dale is truly an American Hero of which our country and the state of Florida can be proud. Update: Captain Doss passed away in 2019.

Education and Training Accomplishments Completed the following correspondence courses of instruction:
Professional or Employment History
Advocacy on Behalf of Veterans
Captain Doss was hired as a Leon County Veterans Counselor on 9 March 1983, after 3 months, he was promoted to the position of Leon County Director of Veterans Affairs with the mission of providing aid and assistance, veterans benefits, claims processing and counseling to all military veterans and their families within Leon County. During the next 19 years and seven months. Captain Doss made a better life for thousands and thousands of military veterans and their families. He lived by the motto of “Leave No Veteran Behind”, the date and time was not important to Dale when he was providing assistance to our veterans. As a result of his attention to detail and dogged persistence in developing a veteran’s claim in a precise and logical manner, claims granted by the VA for his veterans was above 98%, which was probably the highest acceptance rate in the state of Florida, if not the nation at that time.

Dale was highly regarded by all with whom he provided claims assistance and his colleagues. During the period that Dale was serving as the Leon County Director of Veterans Affairs, he became a member of the Statewide County Veterans Service Officers Association, where he would later become the Statewide Vice-President for the counties in the northern part of the state. In this capacity Dale provided close assistance to the northern county Veteran Service Officers. He visited each of them on a quarterly basis providing guidance and assistance on personal matters. Dale also took it upon himself to conduct nighttime and weekend classes for veterans service organizations on the subject of veterans benefits, in particular, he was an authoritative force on the subject of dependency indemnity compensation (DIC), where he trained veterans and their wives in the proper methods of completing DIC forms in advance, (less date of death and cause of death), this (Dale) technique greatly increased the VA claims approval rate for veterans and their families in the northern part of Florida.

Dale was not bound to his desk or office, he was an acclaimed field style service office, he traveled with the necessary claim forms and VA literature in his possession at all times while visiting outlying areas of the county. He also had the necessary VA forms, (etc.) available at all times while on vacation or traveling outside of his work requirement. Even after his retirement, Dale can still be found providing counseling on VA benefits for our veterans.

Civic Activities and Contributions:
Awards or Honors ​Captain Doss passed away in 2019