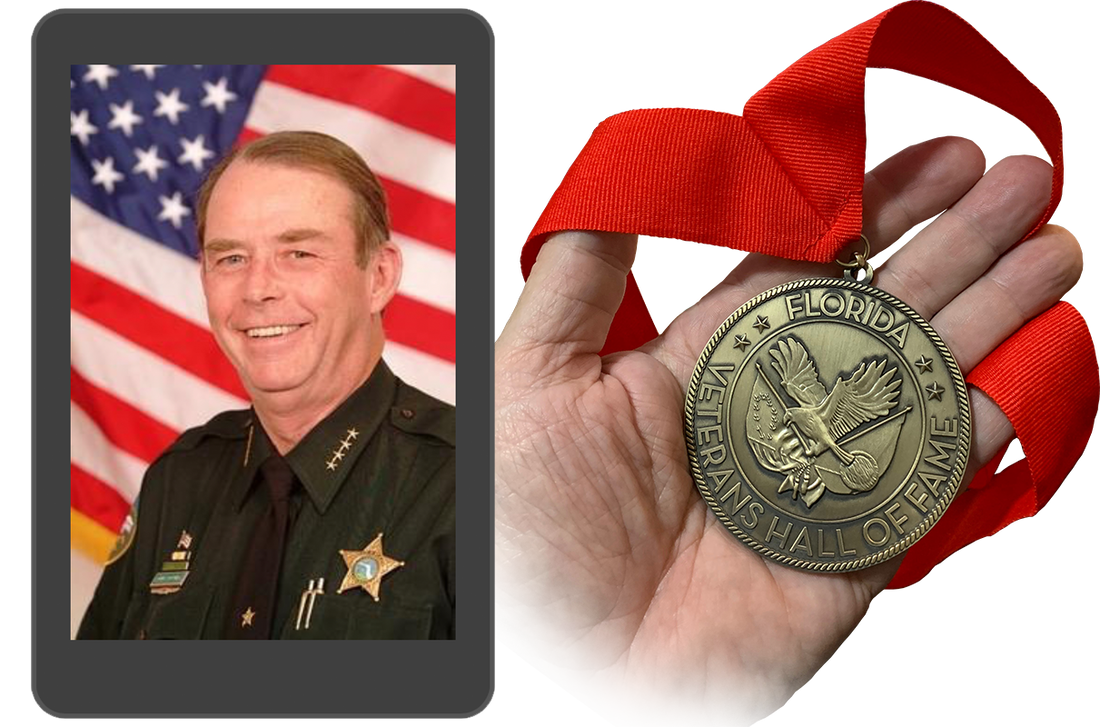 Education and Training Accomplishments - Larry Campbell was born in Jacksonville, Florida on October 22,1942. He grew up in Tallahassee, attending public schools. He graduated from Leon High School. He was a 1975 graduate of Florida State University, the FBI National Academy (1973) and an alumnus of the National Sheriffs Institute (1998).

In addition to these areas of Special Competence, Sheriff Campbell was also qualified to testify in the Circuit Court of the State of Florida as an expert in the areas of: Criminal Homicide/Death Investigations, Narcotics and Dangerous Drugs, Organized Crimes, Undercover Operations, SWAT/Hostage Negotiations, Police Administration and Informants/Confidential Sources.
Professional and Employment History - Larry Campbell began his career in law enforcement with the Leon County Sheriffs Office on January 5,1961. Between 1961 and 1967, he worked as a Jailer and later, a Deputy Sheriff. From 1967 until 1968, he worked as a Special Agent for the Florida Sheriffs Bureau and Special Aide to the Commissioner of the Florida Bureau of Law Enforcement, the forerunner to the Florida Department of Law Enforcement.

In 1968, at the age of 26, he returned to the Leon County Sheriffs Office as Chief of Detectives. By 1970, that rank was known as Captain. Being very much in demand, he again went to work as a Special Agent for the Florida Bureau of Law Enforcement. By 1971, he was Special Agent in Charge of the Tampa Field Office, which was the second largest field office for the Florida Department of Law Enforcement. He supervised the Tampa Field Office for FDLE until 1975, when he moved to Miami in order to supervise the Miami Field Office for FDLE. Special Agent Campbell held that position until 1977, when he was promoted to Deputy Director of the Division of Criminal Justice Information System for FDLE. In 1979, while still working for FDLE, he was assigned to the Governor's Council for the Prosecution of Organized Crime where his assignment was to assist Florida's Statewide Prosecutor and the Statewide Grand Juries. During this assignment, his responsibilities were to assist with the detection, apprehension and prosecution of many members of organized crime families in the State of Florida.

In 1980, Eddie Boone was elected Sheriff of Leon County. After taking office in 1981, Sheriff Boone hired Larry Campbell as a Major, and assigned him to be the Director of the Law Enforcement Operations Division and SWAT Team Commander for the Leon County Sheriffs Office. During this time, Major Campbell supervised the day-to-day operations of all Uniform Patrol Deputies, all members of the Criminal Investigations Bureau, the Traffic Deputies, K-9 Deputies, the Reserve Unit, the Mounted Posse and the Sheriffs Auxiliary. After the 1993 Sheriffs election, Sheriff Boone promoted Major Campbell to Undersheriff, placing him in charge of all three Divisions within the Leon County Sheriffs Office (Operations, Corrections and Administration).

When Sheriff Boone's plans to retire were announced, Larry Campbell was the natural successor to further the community's trust in Leon County's Chief Executive Law Enforcement Agency. Having 3 5 years of hands-on experience both locally and statewide, he was easily elected Leon County Sheriff in 1996. He served in that elected position until his untimely death to cancer on December 24, 2014.
Nominee’s Advocacy on Behalf of Veterans - Sheriff Campbell was a founding board member of Honor Flight Tallahassee, which honored local World War II veterans with an all-expense paid visit to Washington, D.C. to visit the new National World War II Memorial. He helped facilitate the board's first two flights, honoring 160 veterans of the Greatest Generation, before his untimely passing. He was also an active member of the American Legion, the nation's largest wartime veterans' service organization.

Nominee’s Civic Activities and Contributions - Sheriff Campbell’s affiliations with community and civic organizations will long be thought of as the textbook’s definition of servant leadership through community involvement. Some of the countless associations, clubs, committees and charities Sheriff Campbell actively participated in are:

Awards and Honors - Throughout his distinguished career, Sheriff Campbell has received many awards and achieved many accomplishments.

Campbell grew up in Tallahassee, graduated from Leon High School and joined the Marines and later Marine Corps Reserves. During his senior year at Florida State University, he took a job as a patrol deputy at the Sheriffs Office to cover college costs. Six years later, he joined the Sheriffs Bureau, a forerunner of the Florida Department of Law Enforcement, and in 1970, he began working as a special agent for the FDLE.

He joined the Leon County Sheriffs Office in 1981, taking a job as director of operations and overseeing the SWAT Team. He served as under-sheriff for three years before winning his first term as sheriff in 1996.

During his nearly 20 years as Leon County Sheriff, Campbell oversaw accreditation of the Sheriffs Office, increased programs at the Leon County Jail to help inmates turn their lives around, put in place increased education requirements for deputies and pushed for a consolidated emergency dispatch system, which became a reality last year.

He was a community cheerleader and a tireless fundraiser for charitable causes, heading up United Way and American Heart Association campaigns and lending a hand to organizations from the Special Olympics to Refuge House.

Long before his election as Sheriff of Leon County, he was well known for his tenacity, his quick wit and his dedication to the community he chose to serve. His employees knew what he expected of them and they knew he would always be right there beside them no matter what the circumstances. This hard working attitude was flanked by Sheriff Campbell's love for community involvement. It has been said many times that Larry Campbell was practicing Community Policing long before the term became popular among the law enforcement community.

One example of Sheriff Campbell’s leadership and dedication in taking care of others is his unending support for the Florida Sheriffs Youth Ranches. In fact, the Leon County Sheriffs Office has received nine consecutive "State Winner” awards for being the "Largest Contributor to the Florida Sheriffs Youth Ranches Payroll Deduction Program” from 2006 through 2014. In order to receive this award nine consecutive times, the members of the Leon County Sheriffs Office, under the guidance, direction and leadership of Sheriff Larry Campbell have consistently out-given all other law enforcement agencies in the state of Florida, including those considerably larger in size.

Sheriff Campbell was re-elected in 2000 and 2004 without opposition, which is testimony to his dedication, professionalism and popularity in the Tallahassee/Leon County community. Following the terrorist attacks of September 11, 2001, Florida Governor Jeb Bush appointed Sheriff Campbell as Co-Chairman of the Regional Domestic Security Task Force for the Region. Sheriff Campbell was the longest serving RDSTF Regional Co-Chair, serving in the position from the date of his appointment, until his death.

During his tenure. Sheriff Campbell worked with the Board of Leon County Commissioners and successfully increased the starting salary of a Deputy Sheriff by 72 percent. He worked to improve and upgrade equipment for all LCSO employees, including the installation of a Mobile Data Computer for every marked patrol car, patrol rifles for all Uniform Patrol Deputies and School Resource Deputies as well as Tasers for all Deputies and Correctional Officers.

Continued year round training for the entire agency was also a main priority for Sheriff Campbell and this was evidenced by the staff of highly qualified trainers assigned to keep agency members certified in the latest law enforcement and correctional tactics while maintaining the top priorities of public safety and agency member safety.

In August 2007, after a routine physical, Sheriff Campbell was diagnosed with a cancerous tumor in his right lung. A few weeks later, Sheriff Campbell was back at work, minus half of his right lung. He immediately became a champion for the American Cancer Society’s annual Relay for Life. He worked tirelessly, telling anyone who asked how he had stopped smoking on the day of his diagnosis and encouraged others to stop smoking, using himself as an example. Sheriff Campbell told everyone that if he could stop smoking, anyone could. Once again, even through this life changing event, he continued to work long hours and stay involved in the community. This was not just an idea for him, it was a way of life and he worked hard in the community daily because he led by example and he expected his employees to as well.

In 2008, Sheriff Campbell was "cancer free” and re-elected as the Leon County Sheriff for a fourth term. In 2013, after being re-elected for a fifth term, Sheriff Campbell was again diagnosed with cancer. This time the cancer was on his left lung and on his bladder. Sheriff Campbell underwent radiation therapy and multiple rounds of chemotherapy. Never losing his faith, his family oriented mindset or his extreme work ethic. Sheriff Campbell continued working until one week before he died. He passed away two weeks shy of beginning his 54th year in law enforcement.

Certainly, his career is a shining example of how one can distinguish himself above all others in the name of hard work, dedication, perseverance and public service.

​Upon hearing of his passing, the tributes to his service were many.